Injured By A Defective Airbag? Don't Try To Fight A Car Manufacturer Alone! 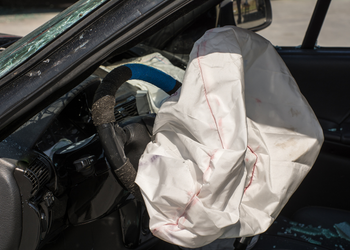 Airbags account for one of the more sophisticated safety features that are installed on modern vehicles. They have undoubtedly saved countless lives and significantly reduced the total number of otherwise traumatic injuries. However, with each advancement in vehicle safety technology, there's of unknown consequences. In other words, the more parts and devices added to a vehicle, the more potential there is for something to go wrong. Our Indianapolis car accident attorney explains further.

Defective airbags account for some of the most serious injuries, either because they don't deploy when they should, or they deploy incorrectly, such has been the case with lawsuits being filed against the faulty Takata airbag systems.

In the case of Takata's defective airbags, it has been discovered that the inflator mechanisms attached to the airbag system can rupture or explode upon deployment, sending metal shrapnel throughout the vehicle. What could be considered an otherwise minor car accident involving airbag deployment, now has the potential to be the cause of traumatic and or deadly injuries due to flying metal. (At least four documented cases of death have been recorded as well as an unknown number of serious injuries.)

Takata's airbag systems have been under recall for several years, however, that number has risen dramatically after further inspections uncovered concerns related to the inflator mechanisms' propensity to rust and contain bad welds. And while ALL owners are being warned that this is an URGENT recall matter, vehicles in humid climates are said to be facing additional risk. These locations include:

A list of the 7.8 million vehicles included in the Takata airbag recall has been provided by the NHTSA and it includes an updated collection of manufacturers, models and years. If you or someone you know is currently in possession of one of these vehicles, the NHTSA is requesting that you act IMMEDIATELY.

If you've checked the NHTSA's airbag recall notice, but would like additional information, you can also visit your car manufacturer's website and enter your vehicle's identification number (VIN).

A VIN number is essentially your car or truck's fingerprint. It contains information such as the make, model and manufacturer of your vehicle. It also is used to track the car or truck's history of accidents, insurance claims, and several other distinguishing features. Most importantly, it can also be used to check for any recalls associated with the vehicle, such as the defective Takata airbags.

Below we've provided links to web page for each manufacturer where you can enter your VIN number and see if a recall is associated with your vehicle:

A defective product case is never easy, and one of the most difficult types is one involving traumatic injuries sustained from airbags.

Trying to fight a major automobile manufacturer and the Takata airbag supplier without experienced, powerful legal representation is a battle you'll likely lose. Why? Car manufacturers and suppliers make billions of dollars and can afford to fight these cases with high-priced attorneys and complex legal defense strategies.

Our legal network includes defective airbag attorneys whose ultimate goal is to hold the car manufacturer and any negligent suppliers responsible for products that are found to be unsafe and dangerous, including airbags.

Additionally, hiring a defective airbag attorney ensures that evidence critical to your case is secure, and any necessary testing or re-creations are performed. Evidence and technical knowledge are absolutely essential to a successful defective airbag lawsuit. Without it, you risk losing everything.

How Much Does it Cost?

Anyone who believes they have a potential Takata defective airbag case will receive our Zero Fee Guarantee. This means that you'll never be charged for a consultation, and the only way we get paid for our services is if you make a recovery on your defective airbag case.

It's our belief that everyone deserves experienced legal representation in a time of need, and in no case is this more important than when you're dealing with an extremely complicated legal matter like a defective airbag lawsuit.