Stay Safe Near Indiana Railroad Crossings With These Helpful Tips

Last year in the United States, nearly 8,000 traffic crashes occurred along railroads. Car-train collisions resulted in over 500 deaths and 6,000 injuries, according to the Federal Railroad Administration. Most of these accidents occurred at highway-rail grade crossings, where the road crosses the tracks on the same level. Unfortunately, Indiana was among the top states to experience these types of accidents. The state was ranked 4th in 2015 with 118 collisions. When it comes to car-train accidents, our Indianapolis car accident lawyer explains, there is virtually no such thing as a small accident. The consequences of these collisions can be devastating to drivers, passengers, and their families.

Why Are Indiana Railroad Accidents So Dangerous?

Train accidents are especially dangerous due to the size, weight, and speed of railroad cars. When an accident occurs, it is difficult to take any action to mitigate the damage. Car passengers and bystanders can do little to protect themselves, and car safety features for vehicle accidents cannot 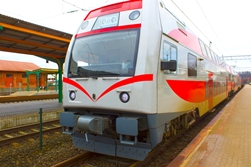 In addition to the great force generated by trains, U.S. railways are common paths for the transportation of large amounts of hazardous material. When a crash occurs, this cargo can spill out and put all those nearby at risk. While these situations are rare, the consequences are extremely serious and the injuries sustained can affect accident victims for a lifetime.

These dangerous accidents occur for a variety of reasons, but there are a few more common causes to understand. These include:

Who Can Be Held Responsible for Indiana Car-Train Crashes?

While every situation is unique, it is possible that a number of people can be held responsible for a crash. If any group involved with the operation of the train and track fails to live up to their duty to protect the public, it is possible to file a legal claim. Some responsible parties could include:

When you are behind the wheel, it’s important to take extra care when approaching a railroad crossing. While rail companies and local governments should be exercising the proper caution, drivers cannot always assume the track is safe. When traveling near railroad tracks, it is best to: