Did a Semi-Truck Tire Blowout Cause Your New Mexico Crash? We Can Help You Hold the Trucker Responsible 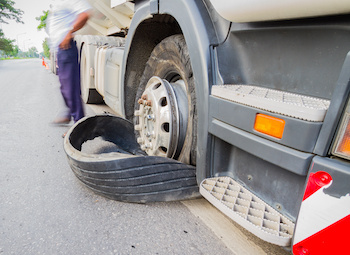 If you’ve spent any time on New Mexico’s highways, you’ve likely seen tire debris from semi-trucks littered across the lanes. Whether you’ve swerved around a big chunk of rubber on I-40 or run over smaller debris on I-25, you know that cast-off pieces of semi-truck tires are a significant hazard. Less common—but far more dangerous—is being near a semi-truck when one of its 18 wheels blows out, causing the driver to swerve out of control.

If truck tire debris caused an accident that left you or your passengers seriously injured, you might need help to get the compensation you deserve from the trucking company. Our experienced Albuquerque accident attorneys look at how tire blowouts happen and who is to blame when they do.

How Do Semi-Truck Tire Blowouts Happen?

Commercial semi-trucks are often referred to as 18-wheelers because they typically have 18 wheels, but they could have as many as 34, depending on how many axles they have. Trucks need a lot of tires because of the length of the rig, the weight it is hauling, and the likelihood that one of the tires will blow out. In other words, the multiple tires keep the truck stable, help to distribute the cargo weight evenly, and take the place of a blown tire to prevent an accident. However, when even one tire blows, an occupant of an unsuspecting passenger car could be seriously injured.

Many factors could contribute to the failure of a semi-truck tire, which means multiple parties could be held accountable if a blowout causes injury.

It takes a skilled truck crash investigator to determine what caused the tire blowout that led to your crash. At Keller & Keller, we have decades of experience holding truck drivers and trucking companies accountable for their negligent actions.

Get a Free Analysis of Your New Mexico Truck Accident

If you have been injured by a commercial semi-truck, call us at 505-938-2300 or fill out our contact form as soon as possible. Our experienced team of attorneys and investigators will be able to make sure that you get the assistance you deserve. From our office in Albuquerque, we're proud to serve injured victims of trucking accidents throughout all of New Mexico.