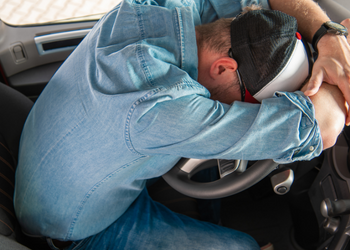 The Federal Motor Carrier Safety Administration (FMCSA) estimates that nearly 28 percent of commercial truck drivers have mild to severe sleep apnea. Why is this cause for concern in New Mexico? Well, if a trucker has sleep apnea, he is more likely to be drowsy when he drives, and that puts motorists at risk on our highways and byways.

What Is Sleep Apnea?

According to the University of New Mexico’s Sleep Disorders Center, obstructive sleep apnea is when the breathing passage at the back of the throat falls shut during the night, causing the sleeper to struggle for breath and wake up in the process. While people with sleep apnea usually snore, they are not generally aware of the sleep interruptions they are experiencing. As a result, they become sleep-deprived and experience drowsiness throughout the day. It is estimated that 80 percent of people with sleep apnea are undiagnosed.

What Is Being Done About Truckers With Sleep Apnea?

Unfortunately, the answer to that is very little. While FMCSA was poised to pass legislation requiring all commercial drivers to be tested for sleep apnea, the new presidential administration, in opting for less regulation of the industry, removed the rule from consideration. However, all commercial drivers must pass a medical examination to renew their commercial driver’s license (CDL) and a diagnosis of moderate to severe obstructive sleep apnea should result in loss of the CDL until the condition is treated.

What If a Drowsy Trucker Causes Your Accident in Albuquerque?

As a New Mexico truck accident law firm, Keller & Keller looks at every possible cause of a crash, including the medical condition of the truck driver. If a trucker is driving with an invalid CDL because of a medical issue such as sleep apnea—or has failed to treat the condition as prescribed by his doctor—he should be found liable for the crash. If his medical examiner failed to restrict his driving despite diagnosed sleep apnea, or an employer knew of the condition and did nothing, they may also be held liable.